In parallel with the IUCN World Conservation Congress, COPEAM (Permanent Conference of the Mediterranean Audiovisual Operators) will be in Marseille for the ICO Solutions meeting, intended to support and promote concrete solutions to the major challenges related to the preservation and sustainable development of islands, coasts and oceans.

A two-level participation is foreseen, with the media coverage of the event and the presentation, in preview, of a series of audiovisual witnesses dedicated to users of the Mediterranean Sea.

Each co-producing team of the two magazines will record:

On the occasion of ICO Solutions, the organizers of the event and COPEAM have wished to promote and give a special attention to the points of view and know-how of the daily users of the Mediterranean Sea.

Following the spread of a call for participation among its members, despite the presence of the pandemic, COPEAM has involved 9 journalists from 9 public televisions in the region to jointly co-produce a series of 24 testimonies of fishermen, lighthouse keepers, tourist guides, sailors, children, scientists, divers, etc.

During the "ICO Solutions commitment evening", on September 9 (from 5.30 p.m. at the Palais de la Bourse), a selection of the best testimonies will be previewed, anticipating their further broadcast on the screens of the partner TVs members of COPEAM.

The screening will take place in the presence of the Secretary General of COPEAM, Mr. Claudio Cappon and the winner of the ICO Solutions Prize for the best contribution to the series, Ms. Rimane Daou from Télé Liban (Lebanon).

-> Trailer of the testimonial series:

Kantara and Mediterradio are two radio co-productions developed in the framework of the activities of COPEAM Radio Commission. At a time when the city of Marseille aims to stress its position as Mediterranean capital, come and discover the existing bridges between media players and listeners in the Mediterranean Region. Find out two unique radio programs in terms of ambition, sustainability and broadcasting base and get in touch with possible partners to relay your action throughout the Mediterranean basin.

Kantara - The Magazine of the two shores of the Mediterranean.

Unique in terms of international cooperation, Kantara will launch its 23rd season from Marseille ... A radio journey around the Mediterranean basin made possible by the joining together of several public service radios and their commitment to become the echo of a common and shared space.

A magazine which, every week, brings together a transnational audience around reports and guests from both shores of the Mediterranean, allowing listeners from the 6 partner countries to learn and exchange in a constructive environment and in a context of mutual knowledge.

Born in Corsica in 1999 at the initiative of Pierre Mari of France Bleu RCFM and in association with the Moroccan public radio Chaîne Inter, Kantara has been able over the years to adapt to changes in the profession and in the regional context, thanks to a shared know-how, a joint will of cooperation and a common writing proficiency.

Mediterradio - The Magazine of the Mediterranean Islands

"Mediterradio" is a radio project based on the collaboration of public radios from Sardinia, Corsica, Sicily and Malta, joined by a vocal and cultural bridge telling the stories of their communities and the challenges of insularity.

Based on mutual understanding between Italian and Corsican languages, the partners (France Bleu RCFM, Rai Sicily, Rai Sardinia and PBS Malta) debate around common issues related to current affairs and music, united in their diversity.

They will launch in Marseille, on the occasion of ICO Solutions, their 10th season. 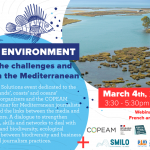 ICO Solutions – #WEBINAIRE: “Media and environment: witnessing the challenges and solutions in the Mediterranean”

As part of the ICO Solutions’ event dedicated to the major issues related to islands, coasts and oceans preservation, the organizers and COPEAM offered a unique webinar for Mediterranean journalists, in order to discuss the links between the media and environmental actors. A dialogue involving 12 COPEAM’s broadcasters and 9 additional organizations to […] 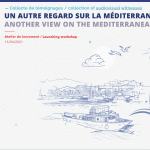 In parallel with the next IUCN World Climate Summit (Marseille – autumn 2021), COPEAM is joining forces with the organizers of ICO Solutions (an international meeting dedicated to the challenges of the preservation of coasts, islands and oceans) to collect witnesses from users of the Mediterranean aimed at the production of a series […]