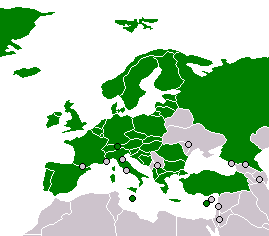 Strasbourg, November 2013 On the 7th of November, in Strasbourg, the Executive Council of the European Audiovisual Observatory approved the adhesion of COPEAM as a member of  the Advisory Committee of this Organisation belonging to the Council of Europe and bringing together representatives from 36 different professional bodies representing numerous sectors of activity within the media. “ This is the first positive development of our involvement in the data collection project launched by the Euromed Audiovisual Programme of the European Union” – stated the Executive Director of the Observatory, Susanne Nikoltchev – recognizing the role of COPEAM as the facilitator  of the collaboration started with ASBU (Arab States Broadcasting Union) and broadcasters in the South-Mediterranean area. A cooperation which,  according to the intention of all mentioned actors -  the Observatory, ASBU, COPEAM, together with EBU – aims at attaining a common goal: the setting up of a Mediterranean observatory of the Media, with an embryonic structure to be established in Tunis, within ASBU, in the mid-term.   Read the press release

Strasbourg, November 2013 On the 7th of November, in Strasbourg, the Executive Council of the Eur... Link