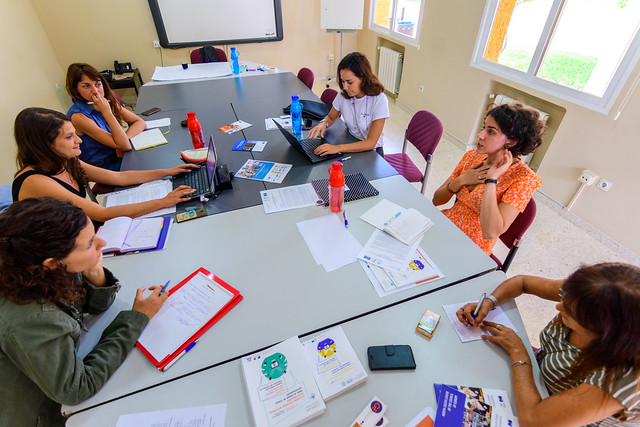 The University on Youth and Development (UYD) takes place since 2000 in the Latin-American Youth Centre (CEULAJ) of Mollina, Spain, and gathers representatives of youth organisations and youth movements from all around the world to discuss, train and be skilled around the global agenda main issues. Organized by the North/South Centre of the Council of Europe, the 20th edition of the UYD was held from 16 to 22 September, 2019. On the 15th, the day before the official kick off of the activities, the North/South Centre invited representatives from COPEAM, ABAAD-Resource Centre for Gender Equality (Beirut) and of the European Network of Migrant Women (Brussels)– all engaged in the promotion of women’s rights in the European, South-Mediterranean and Sub-Saharan regions - to join a preparatory meeting aimed at establishing future partnerships. In view of the implementation of next programme on Women Empowerment, starting in 2020, COPEAM and the North/South Centre discussed together the possibility to set up a training for journalists on gender sensitive media content to be organized during the Mediterranean University on Youth and Global Citizenship (MedUni), which will take place in Hammamet, Tunisia, May/June 2020. Based on COPEAM’s previous experiences in this field, the activity will combine training and production components aiming at reporting on the role of women professionals and entrepreneurs who contribute, through their work, to the development and the economy of their country. The meeting in Mollina allowed to define the general framework of this new and welcomed collaboration between the North/South Centre and COPEAM.

Check the photo gallery of the meeting here: