Morocco has just become the 41st member of the European Audiovisual Observatory, whose Advisory committee was recently integrated by COPEAM. The decision was made by the Council of Europe's Committee of Ministers which met in Strasbourg on the 11th of December. The Strasbourg-based Observatory, which is part of the Council of Europe, provides facts, figures, economic and legal analysis of the audiovisual industries in Europe (cinema, television, video, on-demand services and internet). 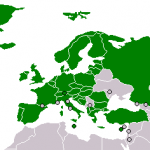 On the 7th of November, in Strasbourg, the Executive Council of the European Audiovisual Observatory approved the adhesion of COPEAM as a member of  the Advisory Committee of this Organisation belonging to the Council of Europe and bringing together representatives from 36 different professional bodies representing numerous sectors of activity within the media.

Euromed Audiovisual : The experts group gathered in Tunis in the framework of the CDSU (Capacity Development Support Unit) and defined the objectives to be set up for the creation of a South-Mediterranean Audiovisual Observatory.

The 1st meeting of the experts group in the field of television and on demand audiovisual services was held in Tunis, on 23-24 September 2013. The experts from the programme partner networks – ASBU, COPEAM and EBU – adopted conclusions favorable to the creation of a South-Mediterranean Audiovisual Observatory which would collect and make available […]