Broadening our borders of cooperation is one of COPEAM main strategic axis in the last few years.
Following the recent approach to the Asia-Pacific Broadcasting Union (ABU), with the participation of the Secretary General to the 2018 edition of the Media2020 conference in Astana (Kazakhstan), and the great contribution ABU gave to our last annual conference in Split, a number of further rendezvous involved again COPEAM and the main audiovisual Asiatic operators:

In both occasions, COPEAM brought its witness related respectively to “Media as Bridge Builder and Contributor of Social Integration” and to “Digital technology and the preservation of our collective memory and culture”.
In addition to this, and after exploring – at the beginning of the year - new partnerships in the Middle East aimed at setting up fruitful ties in Jordan and Lebanon with local players, COPEAM is building brand-new relationships with TAL, the Latin American TVs Association. A three-level cooperation has been established in a COPEAM-TAL Memorandum of Understanding signed in September 2019 and focusing on programmes’ exchange, co-production and mutual support in the fields of training and archives digitization. 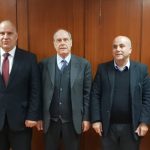 Introduced and accompanied by Dr. Radi A. Alkhas – CEO of Jordan Media City, COPEAM member – Claudio Cappon met, in Amman, the General Manager and the Chairman of the public […]