COPEAM and the EIB again together in reporting climate change: new training launch

The international e-learning course “Reporting Climate Change”, promoted by COPEAM thanks to the support of the European Investment Bank, has been launched on the web platform of the International Telematic University Uninettuno, partner of the project.

The course is aimed at providing a basic knowledge about climate change from several points of view (scientific, institutional, economic, political, etc.) and at analysing the most effective ways of reporting this topic, which is considered as one of the most crucial issues of our times.

Over 30 journalists from 13 Balkans and MENA countries take part in this pilot course, whose contents have been developed by eminent experts in the field of science journalism and climate change. The contents, which include video-lessons, slides, videos and readings, are available both in English and Arabic for an overall period of 5 weeks. A final diploma is delivered to the participating trainees.

The kick-off online meeting, on December 10, was opened by Dirk Heilmann, Head of Media at the EIB, and Claudio Cappon, COPEAM Secretary General, together with the pedagogical team of Uninettuno in charge of the course.

This project comes after a five-year collaboration between COPEAM and the EIB in the area of journalism training & climate change. Due to the Covid-19 pandemic, for the first time the training takes place online: an innovative and unique example in terms of both contents provided and methodologies adopted. 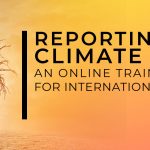 Since 2015 COPEAM, with the support of the EIB – European Investment Bank, organizes annual international activities open to TV, radio and press journalists on the topic of climate change and sustainable development. These initiatives are aimed at reinforcing the journalists’ knowledge and professional skills and thus at promoting a quality information about […]